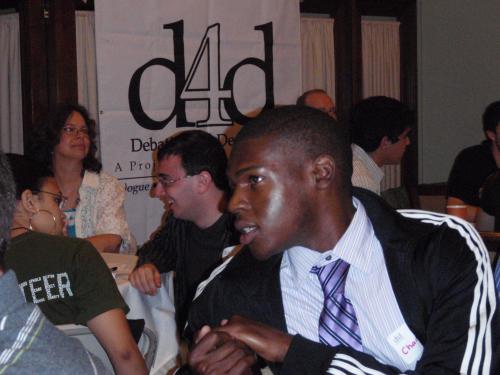 At the conclusion of the Debating for Democracy (D4D) National Conference in April 2008, Project Pericles encouraged student leaders to return to their campus to educate their classmates and community about important policy issues, form coalitions, organize events, and advocate for their issue with elected officials. To support these student leaders, Project Pericles is holding day-long workshops, called D4D on the Road, at 11 Periclean campuses across the country during 2008/2009. Students, faculty, administrators, and community members from all twenty-two Periclean campuses will attend the workshops, promoting inter-campus dialogue and collaboration. The workshops are generously supported by the Spencer Foundation.

The workshops are led by Soapbox Consulting a provider of training seminars, workshops, and lobby days for many national associations including the American Cancer Society, the Campaign for Tobacco-Free Kids, the Human Rights Campaign and others. Soapbox is headed by Christopher Kush, author of The One-Hour Activist. During the 6 hour workshop, participants learn how to analyze federal and state legislation, contact their elected officials and the news media and get involved in elections and public policy.

"We are honored to partner with Soapbox Consulting and the 22 Periclean colleges and universities," said David Rippon, Assistant Director of Project Pericles. "The workshops provide hundreds of people across the country with the skills they need to influence candidates and elected officials before the election and in the long run." Information on registering for a workshop is available at www.projectpericles.org.

D4D on the Road Schedule:

Eugene M. Lang Honored as "Citizen of the Year": The National Conference on Citizenship (NCoC) recognized Eugene M. Lang, founder of Project Pericles, as its "Citizen of the Year" at its annual conference on September 22 at the National Archives in Washington, DC. NCoC Chairman Michael Weiser said the "Joseph Kanter Citizen of the Year Award is being presented to Eugene M. Lang to honor his lifelong commitment to civic participation. Eugene Lang is a shining example of what an individual citizen can do to strengthen our country." Associate Justice of the Supreme Court (retired) Sandra Day O'Connor gave the keynote at this year's conference. NCoC is a leading advocate for civic participation and the only organization in the U. S. chartered by Congress to do this work.

Project Pericles Presents at American Democracy Project Conference: David Rippon, Assistant Director of Project Pericles, and Mary Bombardier, Program Director at Hampshire College, organized a panel at the American Democracy Project conference in June 2008. During the panel, "College and Nonprofit Collaborations: Campus-Based Initiatives for Increasing Political and Civic Engagement," David and Mary talked about how partnerships between Project Pericles and its 22 colleges and universities have led to new programs such as the Civic Engagement Course (CEC) Grant program and Debating for Democracy(D4D). The American Democracy Project is a multi-campus initiative focused on higher education's role in preparing the next generation of informed, engaged citizens for our democracy. The project is an initiative of the American Association of State Colleges and Universities (AASCU), in partnership with The New York Times.

During the 2008/2009 academic year, the Periclean Focus will feature an article on civic engagement written by a Program Director at one of the Periclean colleges or universities.

John Dewey wrote that every generation must re-imagine democracy for itself. As one of the founders of The New School, Dewey understood intimately the power of educational institutions to contribute to this ongoing, ever-incomplete project.

Today, the quadrennial rituals of national elections provide a perfect moment for faculty and students to take stock of the democratic project in all of its dimensions. To this end, the Office of Civic Engagement (OCE) at Eugene Lang College is sponsoring a range of events and opportunities for students, from courses and volunteer efforts to film screenings and speakers. For brevity's sake, I will report on just three of these opportunities.

Through the Civic Engagement Course Grant program, the OCE is providing funds to support Professor David Plotke's popular undergraduate course on the 2008 elections. Students in his course are working in teams to gather data on electoral trends, monitor voter rights, analyze campaign rhetoric, and parse debates. Some will volunteer to work at polling stations, while others will undertake voter registration.

While the OCE primarily works to build long-term community partnerships, now and then we also like to throw students into a 'trial by fire' as director of special projects Ella Turenne puts it. On August 26th, as part of the orientation activities for incoming freshmen and transfer students, we sent over 100 students out to busy public places in New York to register voters. The biggest lesson learned?--Registering voters is really hard work! But students overwhelmingly reported being energized by the experience and wanting to do more.

In October, the OCE will hold a public screening of the documentary film "American Blackout" which examines the role of race in the past two elections. The screening will be followed by a panel discussion comprised of students and faculty, accompanied by audience response. This is just one of many events geared toward mobilizing the university community to participate in the 2008 elections.

Chatham's Project Pericles Highlights Election Issues in Weekly Lunch Series: This fall, Chatham University is presenting the Pericles Lunchtime Lecture Series: Elections 2008. Each week, a professor or expert in the community will discuss an issue related to the upcoming presidential election. From the economy, the environment, and healthcare to national security, the Patriot Act, and political advertising, this series presents issues so students can critically engage in the political process. The series concludes with a recap of the election results, analysis, and a panel of previous speakers giving their insights about the next administration and its policies. The first lecture featured Lindsay Patross on how students can get involved in elections online on Facebook and other social networking applications. The second lecture commemorated 9/11 with Dr. Karla Cunningham, the University's new Hillman Chair in Politics and supervisor of the Pennsylvania Center for Women, Politics and Public Policy. (Source: Allyson Lowe, Chatham University)

Teagle Foundation Awards Student Learning Grant to Occidental College: The Teagle Foundation has awarded a three-year, $150,000 grant to Occidental College to fund an academic support assessment project designed to improve student learning. The goal is to strengthen student engagement and learning by more closely aligning the goals of student academic support services with those of the academic program.

"It's very unusual for a small liberal arts college to formally assess its support functions," said Dean Eric M. Frank, who will serve as the principle investigator on the project. "We'll be able to gather some real data and use that information to improve the student experience and enhance the educational partnership between support services and academic departments."

Campus groups participating in the project include the Center for Teaching Excellence; the Center for Community Based Learning; the Office of Fellowships, Scholarships, and National Advising; the Multicultural Summer Institute; and the Office of Religious and Spiritual Life. The project will establish assessment plans with clear outcomes for each support unit, and will develop a website where findings will be posted. (Source: Maria Avila, Occidental College)

Bates Develops Seminar on Maine Politics and Civic Forum Series: When Bates joined Project Pericles, one key goal was to expand attention to policy and politics. The Harward Center for Community Partnerships and the Politics Department at Bates have renewed a three year commitment to run a seminar on public policy in Maine. Taught by an ex-staffer from Maine's legislative research office, students learn about the policy process and are placed in research partnerships with agencies, legislative committees, or NGOs that advance the partner's work.

Last year, the Harward Center launched a Civic Forum series, convening diverse leaders and experts to engage issues of importance to Bates, Maine, and beyond. Under the theme "Maine In the 21st Century," forums focused on poverty in Maine, globalization and the regional economy, and environmental transformation in the North Woods. All were re-broadcast on the public radio program, "Speaking in Maine." This year, the series will have a double focus. Two pre-election forums look at the stakes of the campaign for active citizenship and, in a panel of student voices, for student activism and interests. Later in the year, forums will explore climate change for Maine, privacy and homeland security, and women's activism from a transnational perspective. (Source: David Scobey, Bates College)

Former President Bill Clinton Visits Allegheny College: When former President Bill Clinton visited Allegheny College on April 19 for a campaign stop in support of his wife, Democratic Presidential candidate Hillary Rodham Clinton, it was more than a rally before this year's Pennsylvania primary election. It was also the first test of the Soapbox Alliance. According to Allegheny, "Not only did the Soapbox's core premise that college campuses should be places open to civic discourse, especially during intense political campaigns prove sound, but President Clinton directly endorsed the alliance in his opening remarks." In November 2007, Allegheny founded Soapbox Alliance, a coalition of institutions working together to end the practice of holding closed campaign events on college campuses. Information can be found at www.soapboxalliance.org (Source: Allegheny College Press Office)

Building Infrastructure for CBL and Civic Engagement at Hampshire: Hampshire College has created the Community Engagement and Collaborative Learning (CECL) Network to facilitate the implementation of the strengthened community service requirement now titled Community Engagement and Learning (CEL), and to extend the capacity of academic programs that provide off-campus internships and learning opportunities for students. The Network is comprised of curricular programs, interested faculty, students and administrative representatives. The Network will extend the infrastructure and resource base at Hampshire and support a diverse range of in-and-out-of-classroom collaborative learning opportunities and enable fruitful and sustainable partnerships with community-based organizations. (Source: Mary Bombardier, Hampshire College)

Opposing Views helps users uncover many sides of public policy issues such as the "War in Iraq" and "Global Warming." Opposing Views introduces the questions, policy experts present their cases (and disagree with each other), and users learn about important policy issues.

The American Association of University Women Educational Foundation annually provides Community Action Grants to individuals and local community-based nonprofit organizations for innovative programs or non-degree research projects that promote education and equity for women and girls. The program provides grants of $2,000 to $10,000 as seed money for new projects, and as start-up funds for longer-term programs. Special consideration is given to projects focused on K-12 and community college achievements in science, technology, engineering, or math. See the AAUW website www.aauw.org for more details.

A new report, "Fulfilling the Commitment: Recommendations for Reforming Federal Student Aid", issued by the Rethinking Student Aid study group - an independent team of policy experts, researchers, and higher education professionals convened by the College Board - calls for a set of policies that would overhaul the nation's student aid system. Study group co-chairs Sandy Baum, economics professor at Skidmore College and senior policy analyst for the College Board, and Michael McPherson, Spencer Foundation president and Project Pericles board member, declared that the time is right for a fundamental rethinking of the student aid system. "Too many low and middle-income students with high potential face barriers to earning a college degree," McPherson said. "These barriers are born of inertia in political will and a piecemeal, rickety financial aid system that no longer serves student or work force needs. A more predictable, simpler and better targeted aid system can help meet the national challenge of regaining our top position in the world for degree attainment."