The Periclean Progress is a publication of Project Pericles, Inc., a not-for-profit organization that encourages and facilitates commitments by colleges and universities to include social responsibility and participatory citizenship as essential elements of their educational programs, in the classroom, on the campus, and in the community. 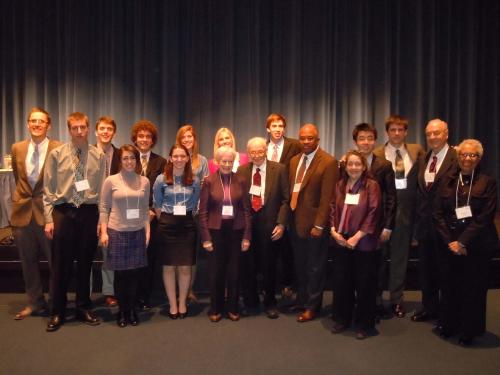 2011 D4D National Conference: On March 24 and 25, 64 student leaders from 27 Periclean colleges and universities joined practitioners, activists, and public policy experts for the third Debating for Democracy (D4D) National Conference. Hosted by Pace University, the conference provided a forum for attendees to collaborate, discuss, and debate our society's most pressing public policy issues, including income inequality, the federal budget deficit, the relationship between technology and democracy, and the importance of the non-profit sector in promoting social change. Throughout the conference, students were advised on how to take concrete steps to promote issues that they support and encouraged to go back to their schools to advance civic and political engagement as an element of higher education. At the conclusion of the conference, a student from The New School commented, "I think the most important piece that I walked away with from the conference was the knowledge that people - whether supporters of Project Pericles, guest speakers, or fellow students - are doing some incredible things in the world."

During the conference, people participated in the following activities:

Social Action Panel: To kick off the conference, students were treated to a panel of four leading social activists who shared their experiences  from their undergraduate days to their current occupations. The panelists have spent a significant part of their careers helping people learn how to influence the leaders who make decisions on critical public policy issues. Panelist Jared Duval's book "Next Generation Democracy" describes a new approach to solving complex social problems. Rajeev Goyal has spent the past few years building a grassroots movement that has successfully influenced Members of Congress to allocate more money to the Peace Corps. Mandara Meyers leads workshops that encourage Teach for America corps members to seek leadership in politics, policy, and advocacy as a critical lever for long-term systemic change toward ensuring that all children in the United States have a genuine opportunity to attain a quality education. Scott Warren started an organization that trains college students to teach "action civics" to lower-income students. The panel was moderated by Jan R. Liss, Executive Director of Project Pericles.

Following the panel, the students met in small groups for a workshop with the panelists. The students learned to develop their "public narrative", a powerful tool for connecting with people and mobilizing support for an issue or cause. They explored the essential elements of effective narrative, which can be used in electoral organizing and political advocacy.

A student from Allegheny College said that "learning about the leadership initiatives that each of the panelists had taken reinvigorated my motivation to be proactive in advocating for things I am passionate about."

Democracy and Technology:  How are young people using technology to research public policy issues and present their opinions to elected officials? Is social media being given proper credit for uprisings that have taken place in the Arab/Muslim world? What evidence is there that social revolutions in the pre-internet era suffered from a lack of cutting-edge communications and organizational tools? These are some of the questions discussed during the "Democracy and Technology" panel. Moderated by David E. Van Zandt, the President of The New School, the panel included Gabriella Coleman, Assistant Professor of Media, Culture, and Communication at New York University; Elizabeth Eagen, Program Officer, Information and Human Rights and Governance Grants Programs, Open Society Institute; and Robert Millis, CEO, Hudson Media Ventures.

D4D Legislative Hearing - Students Present Their Public Policy Solutions:A highlight of the conference was the D4D Legislative Hearing that started gathering momentum in the fall when, in response to a competition sponsored by Project Pericles, teams of students from Periclean colleges and universities drafted original letters to elected officials addressing a particular public policy issue. Project Pericles received 58 team letters from 27 Periclean colleges and universities for independent evaluation. A panel of judges with significant legislative experience selected five of these letters, each conveying a specific national or state issue, to participate in the 2011 D4D Legislative Hearing.

At the hearing, the five finalist teams (Allegheny College, Carleton College, Hendrix College, Macalester College, and Swarthmore College) presented their letters to a Legislative Committee and an audience of students, faculty, Project Pericles Board and National Advisory Board members as well as community, education, foundation, and political leaders. The legislative committee included former U.S. Senators Nancy Kassebaum Baker and Harris L. Wofford; former U.S. Assistant Secretary of State for African Affairs Constance Berry Newman; and former Mayor of Baltimore, Maryland Kurt L. Schmoke. The legislative committee asked each team questions pertaining to their respective letter and their presentations. A student who participated in the hearings said that they "helped me develop my thoughts on an issue I care deeply about, and present them in a persuasive way. It was also enjoyable to be part of a space where young people were sharing their work on political issues."

The legislators selected Carleton College juniors Anna Fure-Slocum and Nick Welna as the winning team. Addressed to U.S. Congressman John Kline, their letter outlined their vision for meeting the needs and interests of students through the reauthorization of the Elementary and Secondary Education (ESEA) Act, with an emphasis on greater student input and influence in the classroom. They will receive a $3,000 award from Project Pericles to develop an advocacy and education campaign to move their issue forward.

The four semifinalist teams will each receive a $500 award also to be used to develop an advocacy and education campaign to move their issue forward. Links to all five letters are below.

Bryan Partridge, the Program Director at New England College, commented, "I really enjoyed the legislative hearings.  The students were well prepared, there was a fantastic back and forth between the panel and the students, and the audience was clearly impressed by the entire event.  My students were in awe of the experience."

Day One of Conference Ends With Rousing Speech: The National Conference's first day was capped off with a celebratory dinner for more than 120 special guests, including students, Periclean presidents, faculty, Project Pericles Board Members and National Advisory Board Members.  The evening began with Senator Harris L. Wofford announcing the winners of the legislative hearing competition. Arthur Levine, President of the Woodrow Wilson National Fellowship Foundation and Project Pericles Board of Director member, delivered the keynote speech comparing his experience growing up in the South Bronx with those of a group of teenagers coming of age in the same neighborhood nearly 40 years later. A student from Ursinus College said the speech was a highlight of the conference because it "embodied the social and political changes that need to happen at a deep level in the United States. He was honest and open and I appreciated that." Arthur Levine also presented Eugene M. Lang, Project Pericles Founder and Chair, with the 2011 Periclean Service Award in recognition of his many years of leadership service to Project Pericles and his commitment to preparing students to be effective citizens and leaders of their communities, nations, and the world.

Students Debate Ways to Address U.S. Budget Deficit: The second day of the conference began with an exercise where students were asked to recommend their solutions for addressing the U.S. budget deficit. Prior to the conference, student attendees completed an exercise that was developed by David Leonhardt, a columnist for the The New York Times. In the exercise, people are asked to balance the federal budget by selecting from a menu of tax increases and spending cuts. On Friday morning, Richard Guarasci, the President of Wagner College, and David Rippon, the Assistant Director of Project Pericles, gave an overview of the federal budget process. The students were divided into six politically diverse groups. The students had one hour to agree to a plan for balancing the federal budget and were required to practice the valuable skill of compromising. At the end of the exercise, each team was asked to present their "balanced budget" to the entire group. A student from St. Mary's College of Maryland stated that this exercise "was the most valuable part of the conference because it allowed me to engage in a meaningful debate with other students."

Income Inequality and Democracy: Most teams that participated in the budget exercise recommended increasing taxes on the top income earners as a way to address the federal budget deficit. Increasing taxes would also address the growing income gap between the top income earners in the United States and everybody else. To further discuss the growing income gap in the United States, Project Pericles invited four top thinkers on this important subject to address the conference attendees: David Callahan, Co-Founder and Senior Fellow, Demos; Jacob S. Hacker, Stanley B. Resor Professor of Political Science, Yale University; Robert C. Lieberman, Professor of Political Science and Public Affairs, Columbia University; and Reihan Salam, Policy Advisor, Economics 21 and Columnist, National Review Online. The panel was moderated by Jennifer C. Olmsted, Associate Professor and Chair of the Economics Department at Drew University and Drew's Periclean Faculty Leader. The panelists provided an overview of the current income and wealth gap in the United States, discussed the decisions made by the federal government that fostered the wide income disparities, provided ideas on policy solutions that must be undertaken, and discussed how the income gap is harming our democracy. A student from Swarthmore College said, "I was blown away by the caliber of scholars you got - I've read one of Jacob Hacker's books!"

Following the panel, the students visited the office of one of the six non-profits.  Many of the students said that the visit to the non-profit was a highlight of the D4D conference. A student from Allegheny College said, "Connecting with a non-profit organization in New York and being able to observe and talk about their work put the conference into a larger context for me." A student from Carleton College commented, "I had the opportunity to visit an organization that does the type of work that I would like to do in the future. And I absolutely loved it."

Final Thoughts: When asked to sum up her thoughts about the conference, a student from The New School said, "There were so many great and important people at the conference and to have the opportunity to interact with them was incredible. I did not know what to expect coming to the conference, but it was better than what I could have imagined." A student from Pace University commented, "I was given the opportunity to meet with other students who shared my values. Also, I got to meet some wonderful human beings."

Project Pericles appreciates the many people who helped make this conference such a success.  We want to thank the students, who exhibited the desire to engage with each other and with the panelists; the Program Directors, who advised and supported their students over the year; the Eugene M. Lang Foundation for providing the financial support to make the conference a reality; the panelists who gave so generously of their time. We especially want to thank Pace University and its President, Stephen J. Friedman, and Project Pericles Program Director Mary Ann Murphy and Assistant Program Directors Heather Novak and Sangeeta Rao for hosting the conference.

The Periclean Progress is issued during the academic year and is posted on the Project Pericles website.