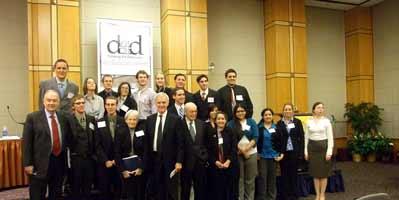 On April 3 and 4, 47 student leaders from the 21 Periclean colleges and universities assembled at TIAA-CREF headquarters in New York for the first annual Debating for Democracy (D4D) National Conference. During the two-day conference, the students participated in a series of forums and activities with leading figures from the fields of civic engagement, education, the environment, and social entrepreneurship. A student leader said the conference "was one of the best experiences that I have had in college".

The students were welcomed to New York by Jan Liss, Executive Director, and Eugene Lang, the Chairman and Founder of Project Pericles. The students participated in a forum and workshops on the "Role of the Student Citizen" with three of the leading young activists/organizers in the United States: Katelyn Archer, Vice President of Grassroots Organizing at Mobilize.org; Chris Myers Asch, co-founder of the U.S. Public Service Academy; and Justin Rockefeller, co-founder of GenerationEngage. During the workshops, the students met with Katelyn, Chris, and Justin to discuss strategies for increasing student civic engagement on their campuses. In discussing their experience in the workshop, one student commented, "The small workshop was the time where I really got to know a handful of students and discuss what we were facing; before that, I didn't really understand the passion of my peers."

The students then participated in a panel discussion with four of the leading social entrepreneurs in the United States who discussed the challenges they faced creating a non-profit. They provided advice and ideas to students considering careers in this growing field.

A highlight of the conference was the "D4D Legislative Hearings." This unique event provided students a forum to articulate their solutions to some of today's most important public policy issues by presenting original legislative solutions to a "legislative committee" consisting of former U.S. Senators Nancy Kassebaum Baker, Bob Kerrey, and Harris Wofford. The six teams who participated in the legislative hearing were selected by a panel of experts from a pool of 41 proposals from 21 Periclean colleges and universities based on the originality and substance of their proposals. The six college teams who participated in the legislative hearing and their proposals were:

During the hearing, each team presented their proposal and answered questions from the "legislative committee". Audience members (faculty, Project Pericles program directors, board members, college presidents, and community leaders) were struck by the poise the students showed as they answered the challenging questions from the committee. When asked about the performance of the student teams, one of the members of the legislative committee said, "I was very impressed with the outstanding efforts put forth by the students." Congratulations to Berea College who the legislators selected as the winning team. The Berea team will receive a $4,000 award that can be used to fund advocacy and education activities including lobbying trips and education workshops. Beth Coleman, a member of the Berea team, said, "I hope that we can use this additional funding to increase direct lobby efforts of our state and national legislators, and promote awareness of how far away "Clean Coal Technology" is from becoming a reality before our government makes a critical misstep in economic and environmental investments." Project Pericles is actively encouraging all of the students who submitted proposals to meet with their elected officials to discuss their exciting ideas.

On the second day of the conference, students participated in the forum "Our Democracy After 2008: A D4D Forum on Three Key Policy Areas." The students had conversations with leading scholars and practitioners related to the three policy areas the students researched: Energy and the Environment; Privacy and Free Speech; and Race, Income, and Access. One highlight of the second day of the conference was the panel on "Race, Income, and Access in the United States: Finding a Way to Strengthen Our Democracy through Education" featuring three of the top academics on this subject: Arthur Levine from the Woodrow Wilson National Fellowship Foundation, Pedro Noguera from New York University, and Michael Rebell from Columbia University Teachers College. When asked about this panel, a student stated, "The issues they discussed affect millions of children, but are still hush-hush matters. After hearing their points, I feel better equipped to directly confront these challenges and advocate for change." Also speaking at the forum were Anya Kamenetz, a staff writer for Fast Company magazine, who spoke on Youth Activism and Cathy Duvall, the legislative director of the Sierra Club, who discussed the environmental issues facing the next President and Congress.

Project Pericles wants to thank everybody who helped us make this conference such a success. We especially want to thank the students who exhibited an infectious enthusiasm throughout the conference; the Christian A. Johnson Endeavor Foundation for providing the financial support that helped us turn our idea into a reality; and TIAA-CREF for hosting the event.

Berea "Energizes" Kentucky: Four colleges and universities in Kentucky including Berea College have joined forces in an innovative partnership between public and private institutions to stimulate the efforts of government, business and education leaders in creating a statewide energy policy. This comprehensive effort, entitled "Energizing Kentucky", was created by Berea College President Larry D. Shinn, Centre College President John A. Roush, University of Kentucky President Lee T. Todd Jr. and University of Louisville President James Ramsey to encourage Kentucky to focus on a coherent and integrated energy policy and will assist this policy formation by bringing together state and national energy experts to discuss the economic, educational, and environmental opportunities and challenges presented by the world's current energy situation.

Harris Wofford Visits Elon University: Two weeks after participating in the D4D National Conference, former US Senator Harris Wofford visited Elon University on April 17 to deliver a talk entitled, "Citizen Service - To Crack the Atom of Civic Power". During his talk, Wofford said, "I think we're in for a real expansion of national part-time and full-time service opportunities across the country." Harris Wofford serves on the Board of Directors of Project Pericles.

Pericleans Participate in CBS News/Uwire Poll: Most students attending four-year colleges and universities in Pennsylvania are enthusiastic about voting in the presidential campaign, according to a poll conducted by CBS News and UWIRE and released in April. Nearly 9 in 10 students attending four-year colleges and universities in Pennsylvania who registered to vote in any state are paying attention to the 2008 presidential campaign. 42 percent said they are paying a lot of attention. These numbers aren't as high as voters of all ages nationwide, of whom 60 percent said they were paying a lot of attention in a previous CBS News poll conducted in March. Allegheny College, Chatham University, and Ursinus College were among the colleges that participated in the poll.

Occidental Professor Brings Students To Lower Ninth Ward: Following Hurricane Katrina, Occidental College Professor of Political Science Caroline Heldman and two students drove 2000 miles from Los Angeles to New Orleans. During their stay in the city, the team did media coverage in the Seventh Ward and assisted with Hurricane Katrina relief efforts. Based on the experience Dr. Heldman designed a class to prepare incoming student volunteers for their work in the New Orleans. The course, "Disaster Politics in the Wake of Hurricane Katrina" was approved by the college and sponsored by the Project Pericles Civic Engagement Course Grant program (funded by the Teagle Foundation and the Christian A. Johnson Endeavor Foundation) and the Carnegie Foundation. Since 2005, Professor Heldman has brought seven groups of students to New Orleans. In December, thirty new Occidental students volunteered in the Lower Ninth Ward.

Eugene Lang College Launches New Civic Engagement Initiative: The Office of Civic Engagement at Eugene Lang College, The New School, is launching a Lower East Side initiative. This initiative draws together a cluster of existing partnerships between Lang College and non-profit organizations, cultural institutions, and grass roots groups located on the Lower East Side. The most recent Lower East Side community partnership to be launched by the Office of Civic Engagement is with the Museum at Eldridge Street, a superbly renovated 19th century synagogue and once the central institution of New York Jewish life. Through on-site courses, internships, exhibitions, and special projects, students will receive training in oral history collection, docent interpretation, tour production and guiding, archival research, and community outreach.

Financial Aid May Increase Civic Engagement: Giving students generous financial-aid packages appears to increase their level of civic engagement after college, according to research findings that were presented at the annual conference of the American Educational Research Association. A study by Shouping Hu, an associate professor of higher education at Florida State University, examined the results of surveys administered to about 3,300 minority students during and after college. Nearly a third of the students surveyed were recipients of Gates Millennium Scholarships, which are awarded by the Bill & Melinda Gates Foundation based on a combination of merit and need. Mr. Hu found that students who received the Gates scholarships were more likely than non-recipients to report being socially and academically engaged in college, an outcome he attributed to the recipients not being burdened with concerns related to their college costs. He says his analysis found that much of the scholarship recipients' engagement in their communities after college seemed to be a result of the value they learned to place on such engagement while in college. But the scholarships themselves seemed to play an independent role in making it more likely people would become involved in their communities after graduation. This story appears in an article written by Peter Schmidt in the March 25th issue of The Chronicle of Higher Education.

The Macarthur Foundation recently unveiled a blog that focuses on digital learning and civic engagement. The blog contains postings from a number of presenters who attended the 89th annual meeting of the American Educational Research Association in New York this year. The theme of the conference was "Research on Schools, Neighborhoods, and Communities: Toward Civic Responsibility".

Mobilize the Polls Program: Mobilize.org launched its "Mobilize the Polls" Program, an initiative that aims to recruit 500 poll workers under the age of 30 for the 2008 Presidential Election. In discussing this important new program, Mobilize.org Chief Executive Officer Maya Enista said, "In many cities across the country, there is a demonstrable need for poll workers. With the new technologies that are being explored to enhance the voter experience, members of the Millennial Generation can contribute their familiarity with technology to aid other members of their community to cast their ballot this November." If you are interested in serving as a poll worker in your district, please contact David Rippon, Asssitant Director of Project Pericles, at david.rippon@projectpericles.org. David will put you in touch with the Mobilize.org team.

Brower Youth Awards to Honor Young Environmental Leaders: The Brower Youth Awards will recognize six young people in North America annually for their outstanding activism and achievements in the fields of environmental and environmental justice advocacy. The winners receive a $3,000 cash prize, a trip to California for the award ceremony and a wilderness camping trip, and ongoing access to resources and opportunities to further their work at Earth Island Institute. Activist leaders between the ages of 13 and 22 are eligible to apply. Further information and the application request form are available at the Brower Youth Awards Web site