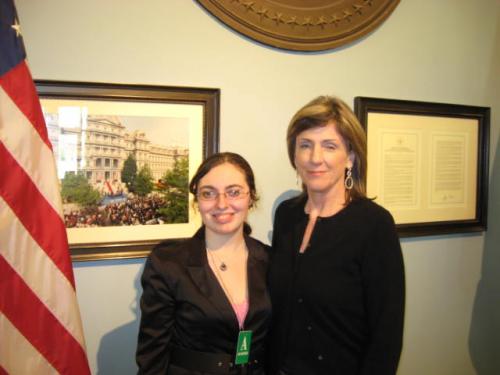 Berea College student Beth Coleman (Left) and Carol Browner, Assistant to the President for Energy and Climate Change in the Obama Administration, met in April to discuss mountaintop removal coal mining in Appalachia.

In April 2009, Periclean students from Allegheny College (Sam Rigotti and Megan Sullivan) and Berea College (Beth Coleman, Ken Johnson, Triston Jones, Sean Owsley, and Jamoria Reed) spent a week speaking to members of Congress and their staff, White House senior staff, and leaders of environmental advocacy organizations to urge action on legislation to end mountaintop removal coal mining in Appalachia. Beth Coleman, a senior at Berea College and a member of the team that won the 2008 Debating for Democracy (D4D) legislative proposal competition, used a portion of Berea's $4,000 award from Project Pericles to fund the trip. During the week, the students participated in a number of meetings:

To read an article that Beth Coleman wrote about her exciting journey from the Debating for Democracy (D4D) National Event in New York in 2008 to the corridors of power in Washington, DC in 2009, click here.

New Program Associate at Project Pericles: Sarah Roberts will be joining Project Pericles as the new Program Associate in mid-June. Sarah recently graduated from Harvard College with an AB in Government. She completed an Honors thesis in 2009: "Depart to Serve Better Thy Country: Preparing Undergraduates for Citizenship at Harvard and in Democratic Theory." Sarah will be replacing Liz Kaziunas who is leaving Project Pericles to attend Syracuse University for a Masters in Information Management, focusing on human-computer interaction. Project Pericles thanks Liz for all of the wonderful work she has done during her two year tenure. We wish her well with her future pursuits.

This annual meeting is an opportunity for Periclean schools to share information about program development and activities, network with fellow Pericleans, discuss current and future opportunities for collaborations, and inject new insights and ideas for future initiatives.

Social Action Projects Completed at Swarthmore: The Eugene M. Lang Opportunity Scholarship Program at Swarthmore College supports six students from each class year over a three-year period. Lang Scholars receive advising and peer support as well as funding for a summer internship and the implementation of a major social action project. Projects completed by Lang Scholars graduating this June include:

Wagner Announces Civic Engagement Awards: The Wagner College 2009 Civic Engagement Awards were announced at a ceremony on April 23. The awards recognize and honor exceptional individuals and community partners who exemplify a sense of caring and responsibility for others and work to address community problems. The awards are given in five categories: Wagner faculty, Wagner staff, Wagner community partner, Wagner student, and Wagner department. Professor Patricia Moynagh, the Project Pericles Program Director at Wagner College, received the faculty award. In addition to the Civic Engagement Awards, Project Pericles gave its Senior Awards for "socially responsible and participatory citizenship" to David Hammill '09. During his tenure at Wagner, David was very involved in a number of Periclean activities including Debating for Democracy (D4D).

Busy Spring Semester at Eugene Lang College: Eugene Lang College at The New School kicked the semester off by hosting a Debating for Democracy (D4D) on the Road workshop in February. In March, 14 students went to New Orleans to work with a local community partner, The Urban Conservancy. Students worked on projects around urban issues and interviewed community members and worked with grassroots organizations. In April, a student debate team from Eugene Lang College had their first match with the Arthur Kill debate team, a group of incarcerated men at a prison in Staten Island. In May, students unveiled a mural they worked on with residents of the Chelsea Elliott Housing Project. Students have also been working with the same community to develop a sustainable community garden. Finally, Eugene Lang College will be sending a delegation of 17 students to South Dakota to build houses and learn about communities in the Cheyenne River Reservation through Habitat for Humanity.

Alternative Spring Break at Macalester: Macalester College has sponsored four consecutive hurricane relief alternative break trips. In addition to a service component, the alternative breaks sponsored by Macalester have included opportunities to connect with Macalester alumni in both Gulfport and New Orleans, a Geology of Katrina Tour with the Chair of the Earth & Environmental Science Department at Tulane, and significant pre & post-trip preparation. Each group has shared their experiences and insights with the Macalester community after their return to campus.

Exciting Year for Civic Engagement at New England College: This year, students at New England College have taken the lead on a number of important issues and now better understand the importance of civic engagement. The Environmental Action Committee (EAC) successfully reinvigorated the school's recycling program by monitoring the recycling in 20 buildings across campus. They have started to take this recycling program outside of NEC to the community and plan to work with the town of Henniker to get a community wide recycling program in place. They also worked with Chartwells, the campus food provider, to reduce waste in the dining hall.

The Center of Civic Engagement at New England College created a student group called CiviCorps that organized two Congressional debates between US Senate and House candidates and organized a voter registration drive. In addition, they have been active with the refugee community in Concord, New Hampshire.

Elon Students Increase Solar Cooking Throughout Ghana: Solar cooking has been dubbed, "The Simple Tool That Saves Women's Lives" and was recently featured in PARADE magazine, prompting a surge of interest in the topic. But for 2010 Periclean Scholars Kristin Shulz and Allison Brooks, solar cooking has been the topic of conversation for quite a while. The two students have teamed up to form a partnership with Ho Polytechnic to promote the use of solar cookers throughout the surrounding communities in and around Ho, Ghana. For Schulz, the prospect of learning about a different culture while devoting her time to service was a perfect fit. "In the past, I've been all over the place," says Schulz. "I always thought it would be neat to see how much I could accomplish if I focused all my energy on one project while working with a group of people." The idea of solar cooking was originally proposed to her by Dr. Brian Digre, director of the International Studies Program at Elon University and recipient of the Periclean Award for Civic Engagement and Social Responsibility in 2008.

Chatham University Welcomes State Representative to Discuss Anti-Discrimination Legislation: Chatham's Project Pericles program recently teamed up with the Social Work Department to present "A Conversation with Representative Dan Frankel". About 50 members of the Chatham community attended and many were able to talk one-on-one with Representative Frankel. Representative Frankel visited campus to discuss HB300, anti-discrimination legislation currently in the appropriations committee of the PA State House. This bill amends the 1955 PA Human Relations Act, to include "freedom from discrimination in employment, housing and public accommodation based on sexual orientation and gender identity or expression." Students were given an insiders view into the workings of legislation. Representative Frankel discussed the legislative process and the politics involved with negotiating the passage of a bill. His staff also provided tips on advocating to government officials. Social work students and others interested in the legislation attended and were able to ask the Representative questions about the bill as well as other current pieces of legislation.

Bates Convenes "PWIPs": One of the core goals at the Harward Center at Bates College is to convene discussions that share the work of campus-community partnerships. The Public Works In Progress series (PWIPs) has been a key venue for such sharing and reflection. Now in its third year, PWIPs are lunch-hour talks by Bates faculty and staff about community-based research, project partnerships, or service-learning courses in which they are involved. The Center hosted 14 PWIPs in 2008-2009. The talks continue to draw about 25 participants a week, including a great mix of Bates faculty, staff, students, and community partners.

The year in PWIPs included a diversity of disciplines, projects, and topics, from educational policy analysis to climate change research on the Maine coast to a video of a community meal created in an Anthropology class. The Harward Center was especially pleased to include presentations not only by Bates faculty and staff, but also by colleagues from Bowdoin College, Colby College, and the University of Southern Maine.