"It was an amazing experience that I will never forget!" - Hendrix College Student

Hydrofracking, electoral reform, and human trafficking were some of the many issues discussed by student leaders as they met with public policy experts and activists at this year's Debating for Democracy (D4D) conference. The two-day conference, an initiative of Project Pericles, was hosted in New York by Eugene Lang College The New School for Liberal Arts.

"My session with Ami Dar [Founder of Idealist.org] made the conference tremendously meaningful, informative, and purposeful. It was very empowering to sit in a room amongst a small group of activists and academics." - Carleton College Student 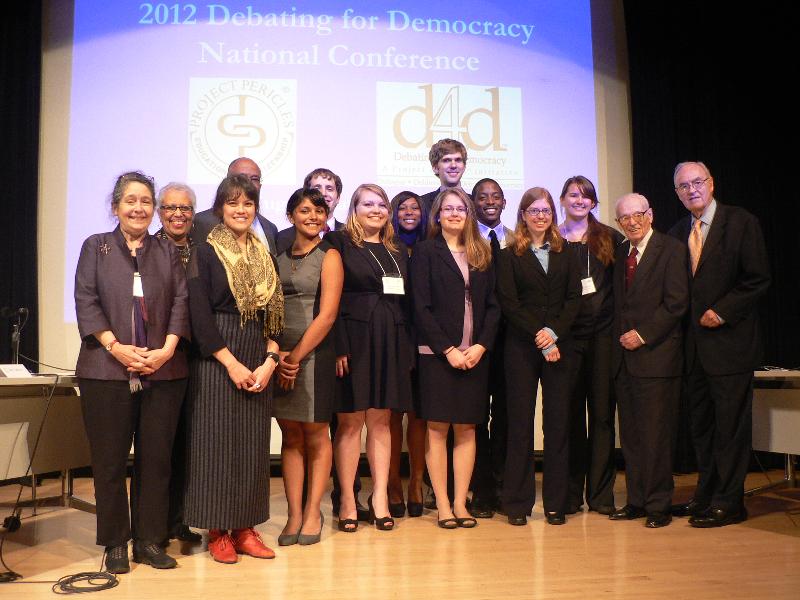 Five "Letters to an Elected Official" were featured at the conference's Legislative Hearing. They were selected from 54 letters proposing innovative solutions to issues including bullying, human trafficking, and Native American education. These letters were sent to over 100 elected officials.

Each finalist team received a cash award to advance their issue through an advocacy and education campaign.

The Earlham College team, represented by David Schutt and Clara Stuligross, took first place and a $3,000 award for their defense of their "Letter in Support of the Budget Control Act" - written to U.S. Senator Kirsten Gillibrand (D-NY). They urged Senator Gillibrand to continue supporting the Budget Control Act and, specifically, the sequestration provision reducing the Pentagon's budget by a trillion dollars. The authors recommended reallocating these funds to educational programs to enhance national security.

Receiving semifinalist awards of $500 were:

Hendrix College for "A Letter in Support of a Mandatory Sex Education Curriculum in Arkansas" to State Representative Linda Tyler (D-AR). Students Lindsey Wiggin and Maia Yang urged legislators to institute a mandatory comprehensive sex education program for all public schools in Arkansas. They noted that similar programs lowered teen pregnancy rates and stated that Arkansas would benefit economically and socially from this requirement.

Widener University for "A Letter in Support of the Fracturing Responsibility and Awareness of Chemicals (FRAC) Act" to U.S. Senator Patrick Toomey (R-PA). Students Leelabati Biswas and Katrina Kelly supported the FRAC Act, which would impose disclosure requirements for the use of potentially harmful chemicals for hydrofracking and would remove loopholes exempting companies from EPA regulations.

The College of Wooster for "A Letter in Support of the Fair Elections Now Act" to U.S. Senator Sherrod Brown (D-OH). Students Daniel Cohen and Andrea Patton supported the passage of the Fair Elections Now Act and a Constitutional Amendment to overturn the 2010 Citizens United Supreme Court decision, arguing that a system of publicly funded elections and limitations on the role of corporations in campaign fundraising would allow the most qualified candidates, instead of the most well-funded, to run for office.

The Arab Spring, Occupy Wall Street, and the influence of social media on activism were hotly debated during a panel moderated by David E. Van Zandt, President of The New School. Jan R. Liss, Project Pericles Executive Director, led a panel discussion examining methods of promoting social action at both personal and systemic levels. Commenting on the breakout groups that followed the panel, one participant said:

"Engaging with people who are directly ... [working for] change was the most valuable part across the board, from the social action breakout groups to debating with the legislative hearing panel to visiting non-profit agencies." - Earlham College Student

Other session topics included career development with a social action or nonprofit focus; the impact of the financial crisis on the federal budget; and the implications of the Citizens United verdict for campaign finance reform and civic participation.

Featured panelists and speakers included, among many others, Craig Calhoun, President of the Social Science Research Council (SSRC); Jeffrey Clements, author of Corporations Are Not People and a leading activist working to overturn Citizens United; Jeremy Heimans, Co-Founder and CEO of Purpose and, recently, named a Young Global Leader by the World Economic Forum; Danielle Moss Lee, President and CEO of Harlem Educational Activities Fund; and Ana Polanco, Managing Director of Organizing at Amnesty International USA.

At dinner, keynote speaker Carol Browner delivered an impassioned speech arguing that individual action can have a meaningful impact on policy decisions and urging students to make a personal commitment to public service. Ms. Browner served as Former Director of the White House Office of Energy and Climate Change Policy in the Obama Administration and former Administrator of the EPA in the Clinton Administration. She was introduced by her sister, Stephanie Browner, Dean of Eugene Lang College The New School for Liberal Arts.

Capping the evening, Project Pericles Founder Eugene M. Lang presented the organization's highest award, the Periclean Service Award, to Richard Ekman, President of the Council of Independent Colleges, for his longstanding commitment to Project Pericles and civic engagement and his many valuable contributions to higher education.

Swarthmore's team is meeting with their congressional representatives and developing a program to improve financial literacy among lower income residents in neighboring communities.

"Because of the Carleton D4D award, my students, who have many experiences in youth programs and plans to become teachers, have begun to expand their horizons and to challenge educational policy at a systemic level.  It's very exciting to see and be a part of this." - Adrienne Falcon, Carleton College's Project Pericles Program Director.

The conference concluded with student participants visiting nonprofit organizations to learn about their work and possible careers in the nonprofit sector.

"The trip to the nonprofit turned out to be the most valuable because I learned about issues and policy ideas that I had never thought of before." - Drew University Student

Our thanks to the Eugene M. Lang Foundation and to our Periclean colleges and universities for funding this conference.

The Periclean Progress is issued during the academic year and is posted on the Project Pericles website.

To submit Periclean-related information for publication, email us at garret.batten@projectpericles.org.