On April 8 and 9, 2010, Project Pericles hosted the 2010 Debating for Democracy (D4D) National Conference in New York City for 60 student leaders from 26 Periclean colleges and universities. The event consisted of workshops, keynote addresses, panel discussions, and legislative hearings. The conference was supported by the Eugene M. Lang Foundation and was hosted by The New School.

A highlight of the two-day conference was the D4D Legislative Hearing. Groups of students from Periclean colleges and universities who wished to participate in the hearing submitted original letters to an elected official to Project Pericles addressing a variety of public policy issues. Project Pericles received 63 letters from 26 Periclean colleges and universities. A committee of judges with significant legislative experience selected six finalist letters.

At the conference, the six finalists presented their letters to legislators and an audience of students, faculty, and Board and Advisory Board members as well as political, education, foundation, and community leaders. The legislators included former U.S. Senators Bob Kerrey, and Harris Wofford. (Former Senator Nancy Kassebaum Baker, slated to be the third legislator, was unable to attend when her flight was canceled due to bad weather. However, her questions and suggestions for the students were presented during the hearing.) At the end of the event, the legislators selected the winning letter from Berea College. The Berea team will receive a $3,000 award that can be used to fund advocacy and education activities including lobbying trips and education workshops. The semi-finalist teams will each receive a $500 award to be used for the same purpose. 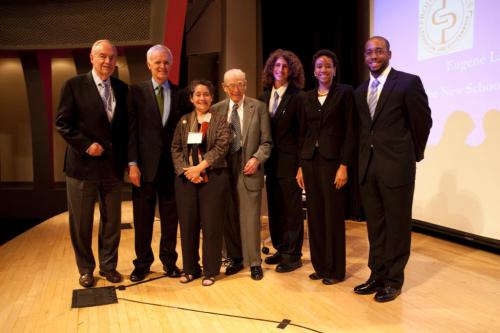 The six Periclean teams that presented their proposals at the conference were:

Earlham College, "A Letter in Support of the Employment Non-Discrimination Act (ENDA) of 2009 to Congressman Mike Pence (R-IN)"

Swarthmore College, "A Letter in Support of the DREAM Act to Senator Arlen Specter (D-PA)"

To learn more about the conference, including an in-depth look at the panels and workshops, read the May 2010 Periclean Progress E-Newsletter.